crystal discovery could change the future of quantum computing / Researchers observed the interaction of a strange state of matter for the first time.

Physicists are used to dealing with some of the very weirdest forms of matter and ideas in our known world, from levitating superconducting materials to the mind-bending theory of time dilation. But even for physicists, time crystals are strange.

They might sound like some retro science fiction TV villain's hidden treasure, or perhaps fuel for a Time Lord's TARDIS, but this unusual state of matter is very much a fixture of our reality. Critically, scientists have observed the interaction of these crystals for the first time.

This observation takes scientists a step closer to understanding the strangeness of our world, and also has the potential to "warm-up" quantum computing, making it much cheaper and more accessible.

The interaction is detailed in a study published Monday in the journal Nature Materials.

What is a time crystal?

We're all familiar with the most common forms of natural matter — liquid, gas, solid, and even plasma. Time crystals, on the other hand, are a newly discovered type of matter. This strange matter was first theorized by Nobel Laureate and MIT professor, Frank Wilczek in 2012 and confirmed just four years ago.

Samuli Autti, a research associate at Lancaster University and first author of the new time crystal study, tells Inverse that time crystals are basically a collection of particles in constant motion without an external force.

"Conceptually a time crystal is a very simple thing: It is a substance where the constituent particles are in constant, systematically repeating motion even in the absence of any external encouragement," Autti explains. "This is very unusual in nature."

He also admits the phrase 'time crystal' "sounds like someone adopted the name from a 1980's TV science fiction show instead." 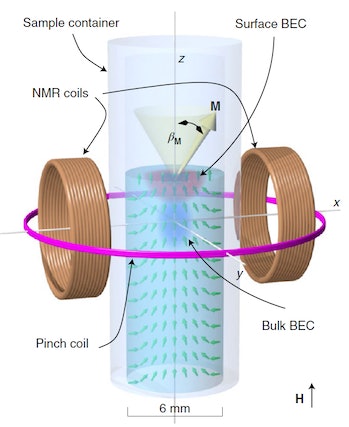 How to make a time crystal — In order to create these time crystals, the team first cooled down (to just above absolute zero at nearly -460 degrees Fahrenheit) a mostly vacuum-filled test tube with a rare helium isotope. Two copper coils were then placed around the tube and given a "kick" (aka, a radio-frequency pulse was passed through them) to generate two clouds of constantly rotating magnetic particles. These aren't something you can see with the naked eye per se, but Autti explains that these clouds create a signal that can be measured to confirm their presence and the number of particles they consist of.

These mysterious clouds are the time crystals.

What the team observed, via these invisible signals from the time crystals, was the exchange of particles back and forth between these two clouds, signaling that the time crystals were in contact with each other.

If this result sounds confusing, Autti says it took the research team a few years to fully understand it themselves.

"It took us all this time to really understand what was going on in the experiment and what would be the correct, clear language to present it so that the community would understand it," Autti says. "In the end, the outcome may be simple and clear, but it is only so because of a number of failed attempts and a pile of rejected ideas." 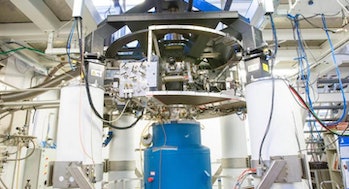 Getting their materials super, super cold is essential for experiments like this, and to do it scientists used elaborate super-cooling refrigerators.Aalto University/Mikko Raskinen

What time crystals mean for quantum computing — Another exciting part of this discovery for researchers, aside from simply observing this interaction, is that it is also an experimental confirmation of something called the AC Josephson effect, a macroscopic quantum phenomenon that has applications in the field of quantum computing.

Autti says that it's hard to know exactly where a discovery like this will take the field of physics or what its future applications might be, but some potential applications for this discovery include improved atomic clocks (which would, in turn, improve technology like gyroscopes and GPS) as well as quantum computing.

"Basically, contemporary superconducting candidates for the components of a quantum computer are based on a Josephson junction between two superconducting metals," Autti explains. "Essentially this is the same thing as the interaction we observed between [the] two time crystals."

In addition to the time crystals' demonstration of this quantum effect, Autti says that time crystals are good at intrinsically protecting their own coherence. This means they're not easily thrown off by outside stimuli — a necessary trait for sensitive quantum computers.

Perhaps most exciting is the potential for these time crystals to usher in a new era of "warm" (or, non-absolute zero) quantum computing. Due to the similarity of these crystals to a form of solid-state matter that condenses at room temperature, Autti and his colleagues believe that time crystals may be able to do the same. The ability to do away with super complicated and expensive cooling chambers for quantum computers could be a big step towards making this technology more accessible and scalable.

Still, Autti says there's plenty of work to do before that reality comes to fruition:

"As for the timeline of applications, many steps towards a more-approachable practical realization are needed before one should expect applications."

Abstract: Quantum time crystals are systems characterized by spontaneously emerging periodic order in the time domain. While originally a phase of broken time translation symmetry was a mere speculation, a wide range of time crystals has been reported. However, the dynamics and interactions between such systems have not been investigated experimentally. Here we study two adjacent quantum time crystals realized by two magnon condensates in superfluid 3He-B. We observe an exchange of magnons between the time crystals leading to opposite-phase oscillations in their populations—a signature of the AC Josephson effect—while the defining periodic motion remains phase coherent throughout the experiment. Our results demonstrate that time crystals obey the general dynamics of quantum mechanics and offer a basis to further investigate the fundamental properties of these phases, opening pathways for possible applications in developing fields, such as quantum information processing.